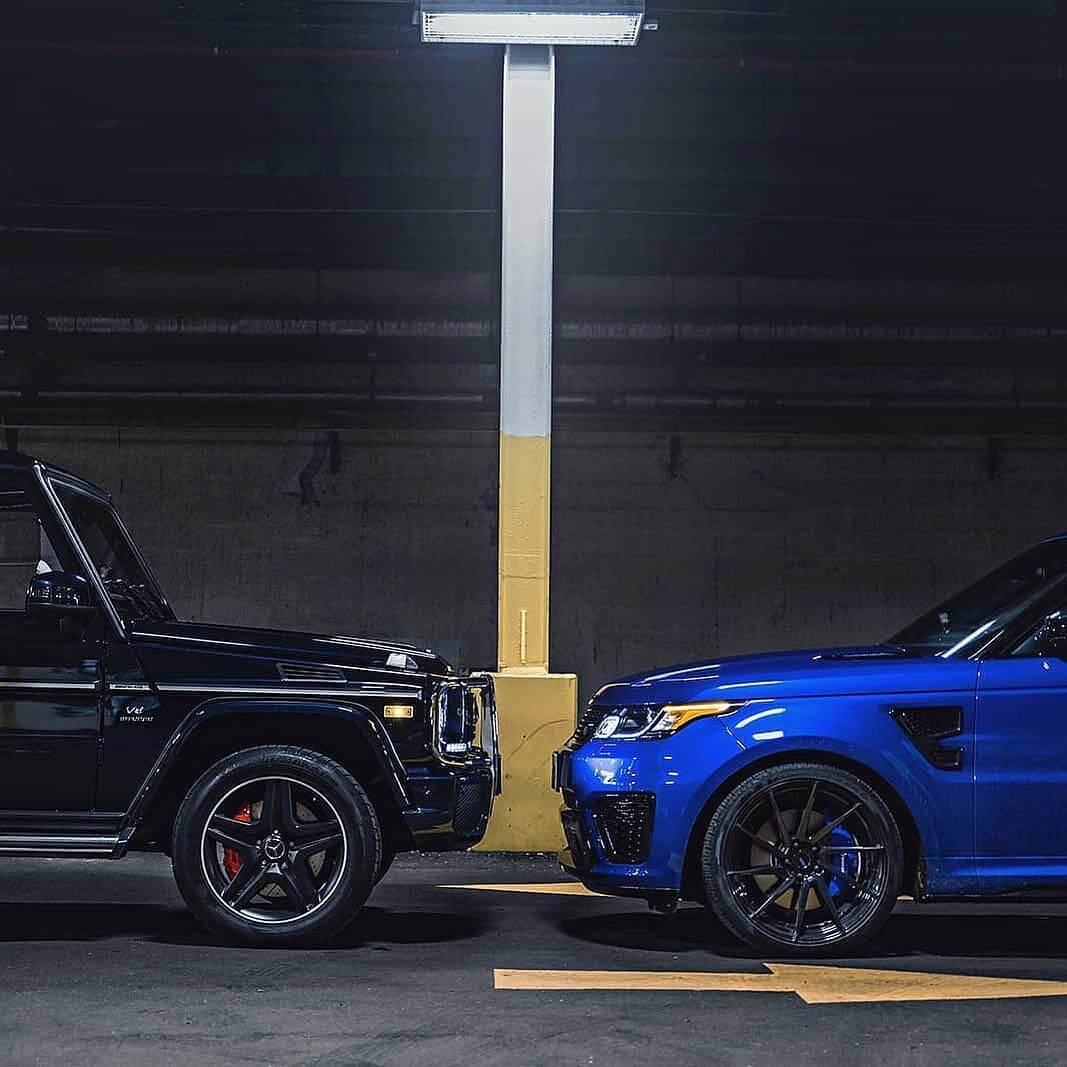 When you think ‘big expensive luxury SUVs’, there are two prominent names that immediately come to mind. 1, the legendary Range Rover and 2, the equally esteemed Mercedes-Benz G-Wagen. They’re both venerated with a cult following of their own. Both Range Rover and Mercedes-Benz understand this too, as the contemporary models definitely evoke the looks of their respective roots that potential prospects seemingly dote. Therefore, we’ll be comparing the two, specifically pitting the Range Rover Sport SVR against the Mercedes-Benz G63 for parity. Similarities

Both the G63 and Sport SVR follow their genesis that dates far back. In fact, the original G- Wagen and Range Rover was introduced in the 70s. Similarly, both models slowly transitioned from rugged, essentially barebones off-road prowlers into extravagant status symbols that thrives at roving around cities. Of course, it can also be argued that these are amongst the most excessive automobiles money can readily purchase. Both of them are massive SUVs powered by ridiculous forced-induction V8s driving all four wheels endowing a 0-62 mph time of around 4.5 seconds. In other words, both of these SUVs will handily tail a modern Porsche 911 Carrera 4 off the line. Both SUVs also sports driving modes for different occasions. While buyers of either model will likely never see dirt in their hyper-luxurious opulent SUVs, both models haven’t lost their innate trail expedition aptitude. Both models have locking differentials, variable ride height, solid ground clearance, low range, clever computerized terrain navigation, etc. And while going off the beaten path, you’ll be surrounded by plenty of leather and exotic materials within the cabin.

Range Rover Sport SVR
SVR in the name represents the involvement of Jaguar Land Rover’s Special Vehicle Operations (SVO) team in the production. Powered by a 5.0-litre supercharged V8 that puts out 575 horsepower and 516 lb-ft of torque, the SVR sprints from 0-62 mph in just 4.3 seconds all the way to 176 mph. 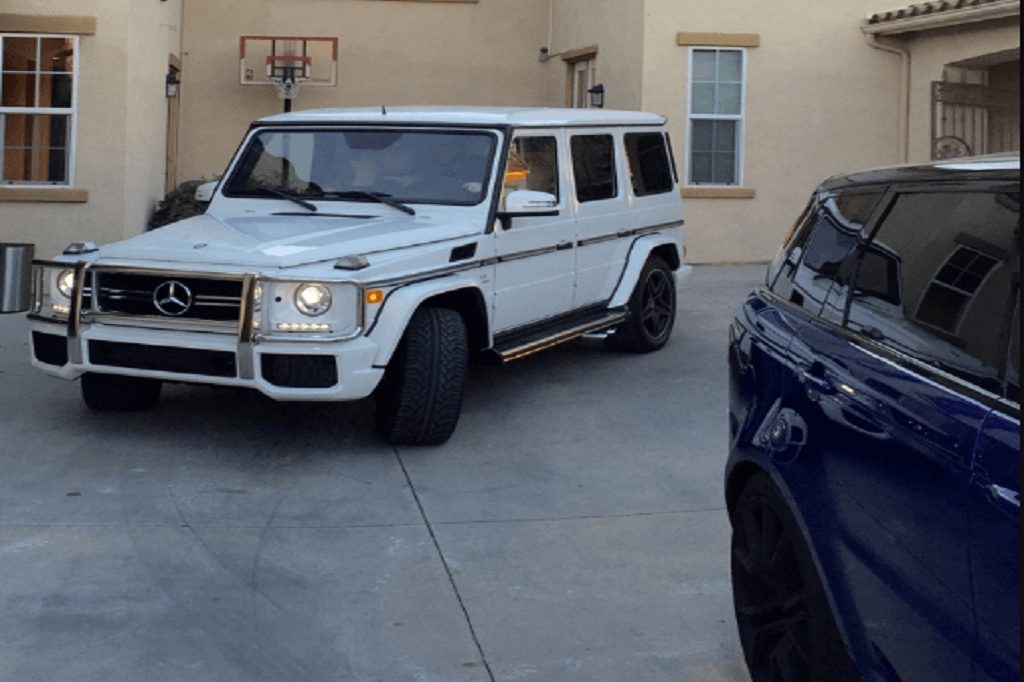 That said, most Range Rover Sport SVRs you’re going to see isn’t going to use even half of its neck-snapping prowess. Instead, you’ll see its other trait plainly displayed. Boasting the classic Range Rover shape and brawny, yet somehow sleek lines, it demands attention from the crowd while rolling on asphalt. While some may say it’s a tad ostentatious, there’s no denying the road presence that’s indigenous to almost all modern Range Rovers In terms of dynamics, the Range Rover Sport SVR has an edge as well. It’s relatively light at 5,093 lbs and it’s actually designed to dance around corners gracefully. You may have seen videos of one manoeuvring through the very technical Tianmen Road in 9:51. That’s an impressive lap for a 7-mile course with 99 turns. In fact, it outpaces a Ferrari 458 driven on the same road by over 30 seconds. And with all that handling finesse, you’ll still see videos of the same SUV that anyone can navigate tricky country trails in thanks to the Terrain Response 2 system.

Mercedes-Benz G63 AMG
It’s worth noting that the G63 AMG we’re talking about here is the latest iteration with the new V8. Powered by the 4.0-litre M178 twin-turbocharged V8, which is smaller than the SVR’s V8, it punches well above its weight class, producing 577 horsepower and 627 lb-ft of torque. The latter is especially remarkable when it comes to hills and overtakes. While it’s portly at 5621 lbs, the G63 AMG will certainly feel sprightly. Mercedes-AMG has somehow managed to preserve that peak torque throughout the rev range, allowing keen drivers to effortlessly surge pass cars on highways even just feathering the throttle. It’s quite comical when you remember that it’s a hefty SUV. That said, its lofty nature and weight encumbers it, compromising its cornering affinity 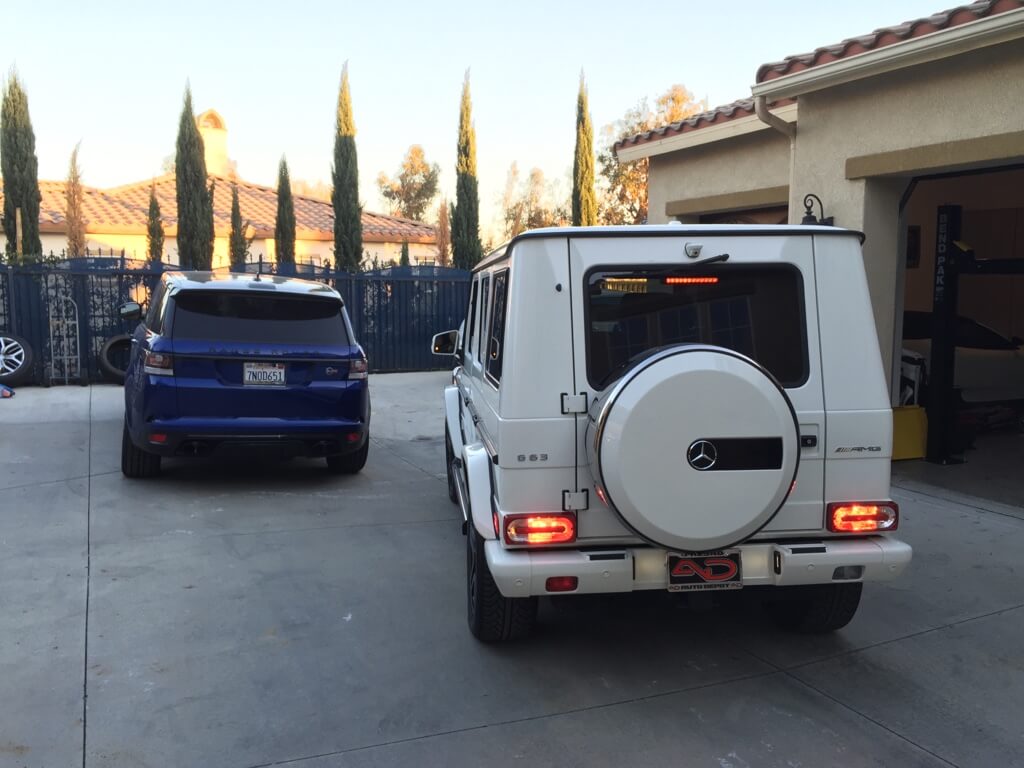 Arguably, the G63 AMG is one of few cars that exhibit comparable road presence to the Range Rover. People absolutely love its decade-old muscular and geometrical styling retrofitted with modern touches. Thankfully it’s now an up-to-date SUV underneath despite conserving the classic look.

Verdict
Let’s admit it, both the Range Rover Sport SVR and Mercedes-AMG G63 are status symbols. People buy these to cruise around places like the Beverly Hills, and both will do an excellent job at that. However, I’m ever so slightly inclined towards the SVR, simply because I do love the subtle supercharger whine and thunderous, yet characterful exhaust note. 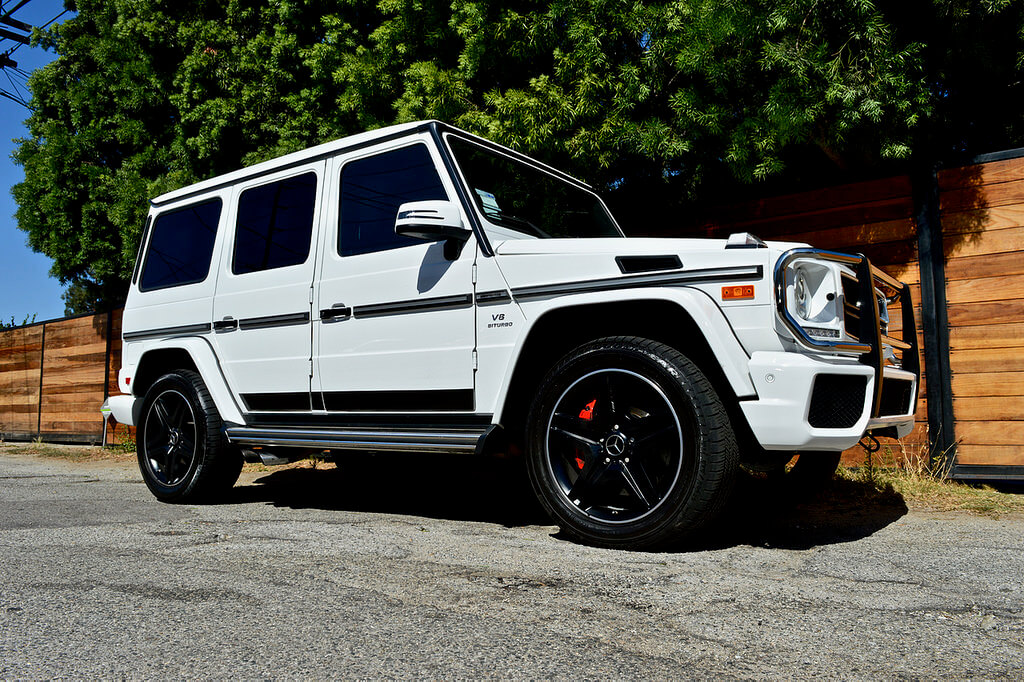 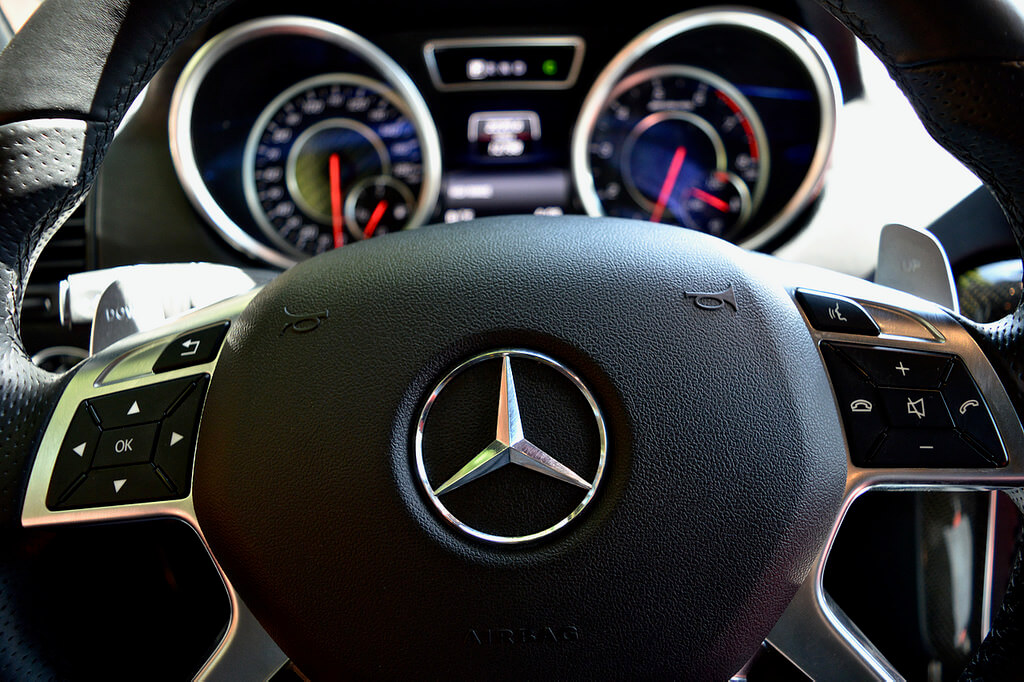 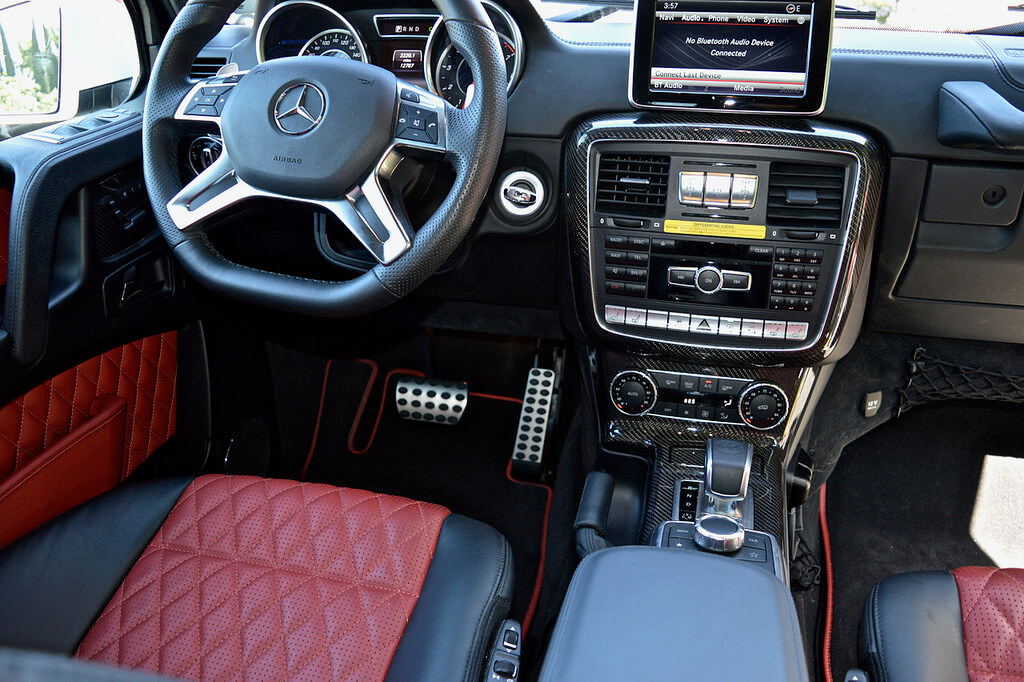 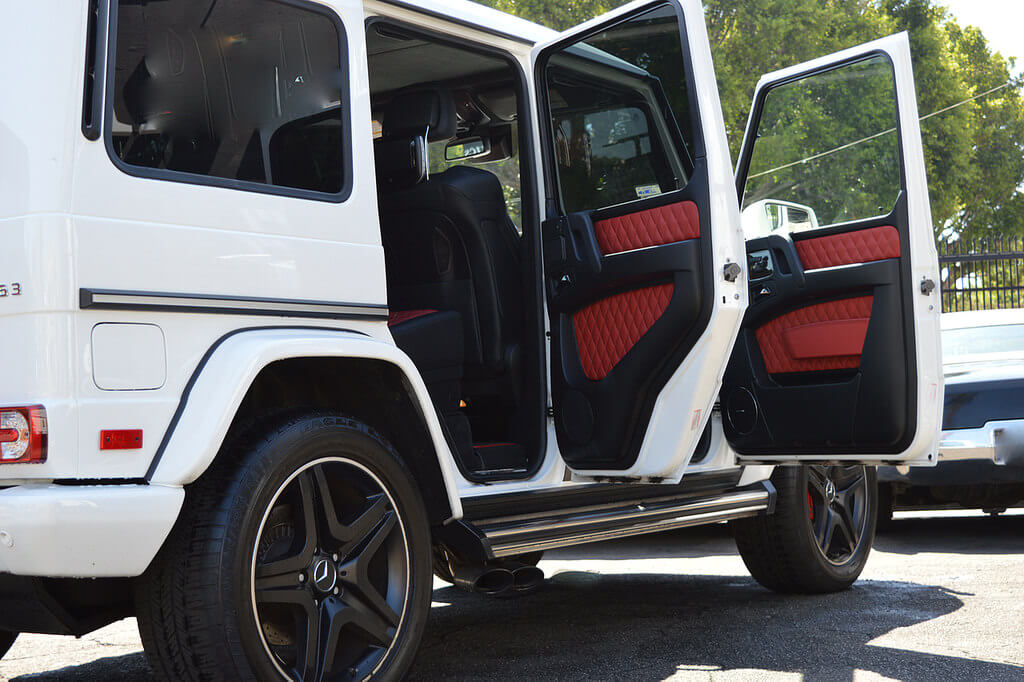 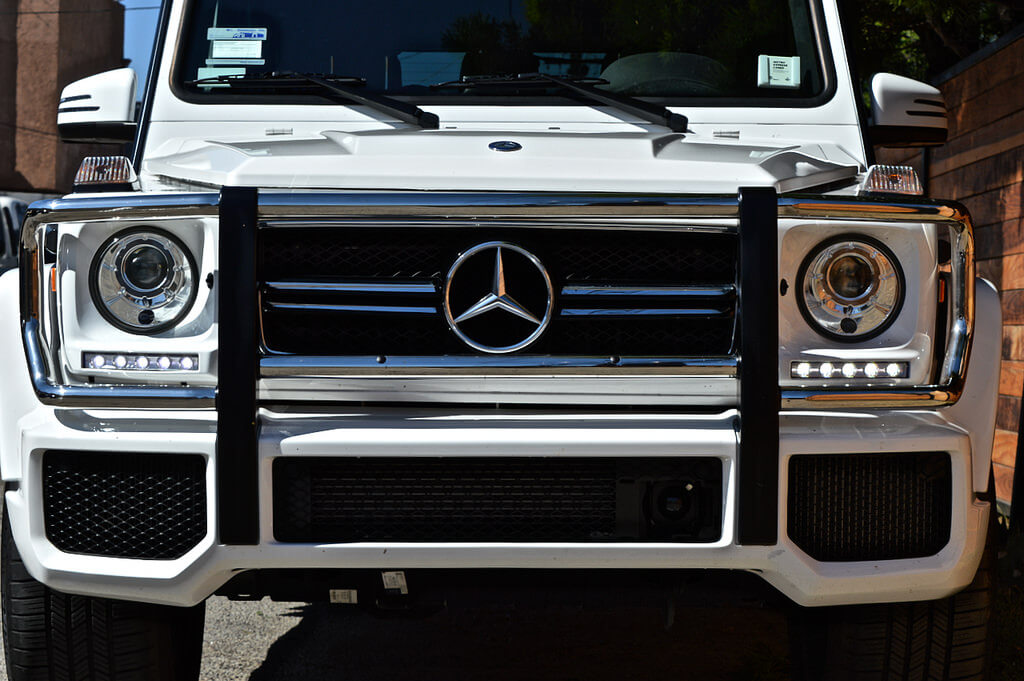 Step inside AMG, the performance racing division of Mercedes Benz and experience the legendary philosophy of One Man, One Engine firsthand. rged and balanced for each individual engine, AMG crankshafts are combined with remarkably lightweight – yet strong – aluminum pistons for smooth, immediate response.
From the creators of the 45, 63 and 65 model lines comes Mercedes‑AMG 43, nine authentic performance vehicles with AMG pedigree and a thirst for speed. Fitted with numerous AMG enhancements, every vehicle screams “Drive me,” because in the AMG family, performance is king. From coupes and sedans to SUVs and roadsters, the power and handling of the 43 lineup beckon to the world’s most passionate drivers. All that’s left to do is grip the wheel and press the accelerator.**

In 1967, two automotive engineers with a passion for motorsports began fine-tuning engines for Mercedes-Benz racecars in an old mill. Today, as the performance division of Mercedes-Benz, AMG creates some of the most sought-after vehicles in the world. They’re the product of skilled craftsmen, designers and engineers who live to test the limits, and one shared conviction: on the road to driving performance, short cuts never win the race. 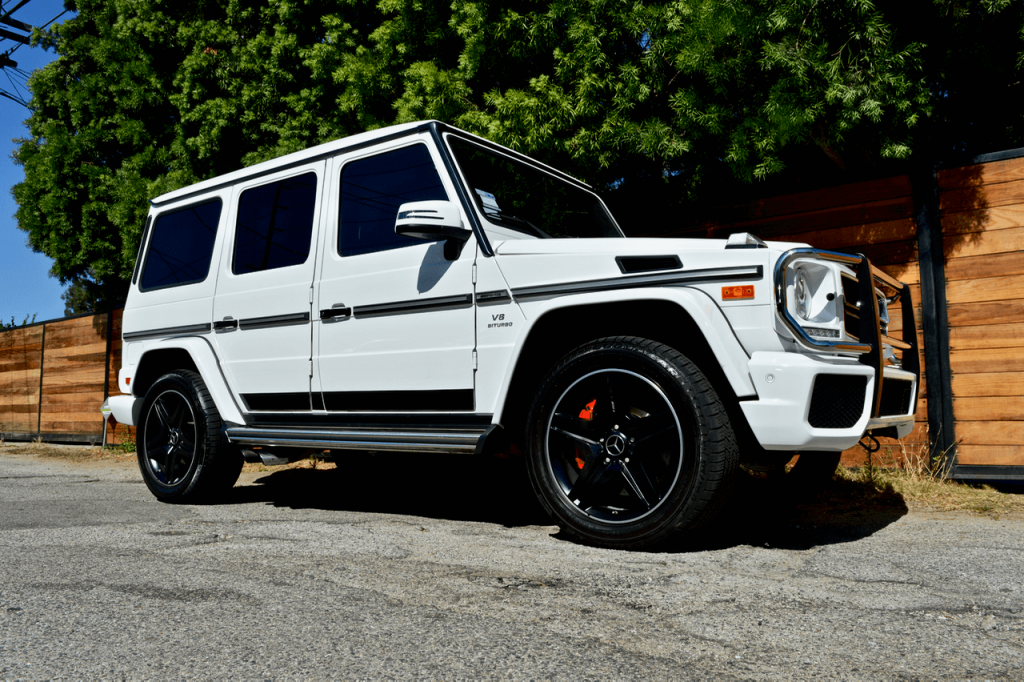 Just like the G63 rental, G 550 has an All-Wheel drive system with a 7-speed automatic transmission. The G 63’s AMG SPEEDSHIFT PLUS 7G-TRONIC automatic transmission features AMG shift paddles on the steering wheel and three driving modes with different accelerating and shifting experience. Both have three locking differentials for off-roading.

They have live axles and coils up front and in the rear. Both the G 550 and G 63 latest models are equipped with optional driver adjustable dampers and have recirculating-ball type steering system.

For the G 63, supportive comfy leather sets which are heated and ventilated are what ushers one in. The white illuminated stainless steel panels with AMG lettering hardly goes unnoticed. The G 63 boasts more than 120 cubic feet of interior space. The state of the art infotainment system has been redesigned to feature a large, center-mounted color display as part of the COMAND system with a multiple DVD player and controllers. The interior access and navigation system has been integrated with special off-road features also made available.

With an extra $ 149, 175, one can get carbon-fiber interior trim, rear seat entertainment systems with dual monitors, purple design mystic blue metallic paint, heated steering wheel, and an all-wheel floor matt. However, the legroom, headroom and the narrow cabin are not that impressive.

For the G 550, the cabin is laced with leather and though narrow, is upright. The infotainment system includes a TFT color display between two round dials and a tablet-style display for the standard COMAND system, merging navigation, entertainment and connectivity functions.

The G 63 comes with an AMG sports exhaust system, almost similar to G 550’s dual side-exiting exhausts. Just like the G 550, the G 63’s suspension system settings are adjusted for more handling characteristics. It has a twin-blade radiator grill with four chrome inserts. Still on the front, the AMG G 63 bumpers have three large airflow inlets. The new LED daytime running lights are positioned just below the bi-xenon headlights.