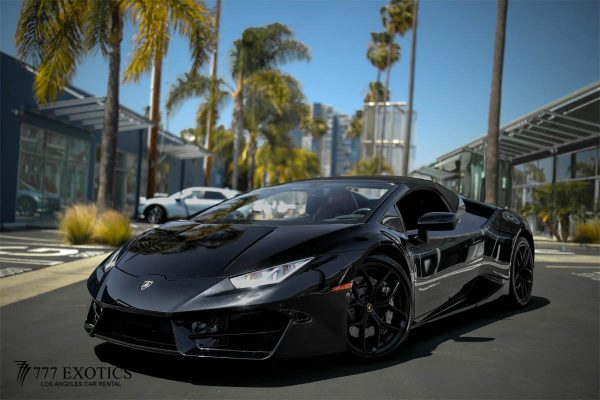 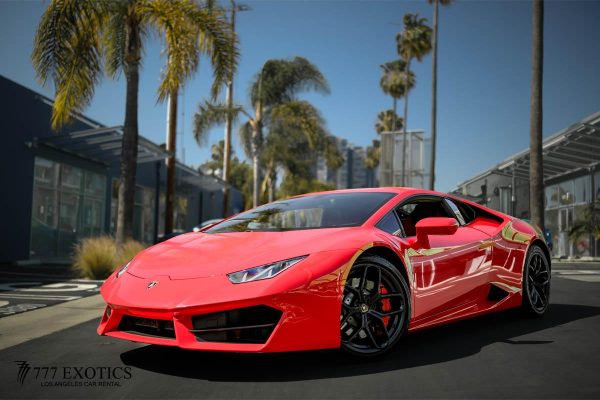 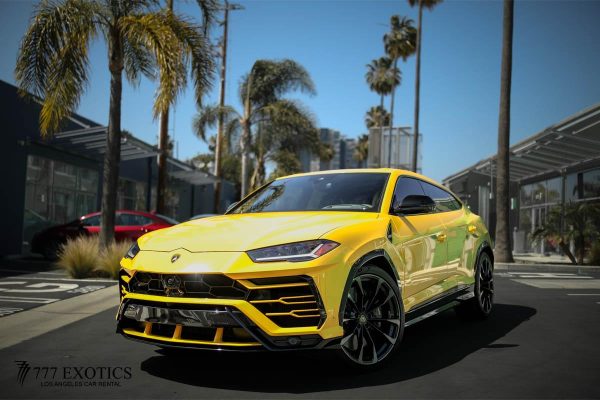 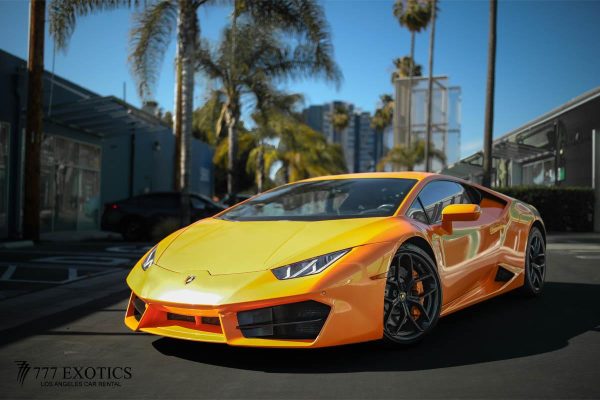 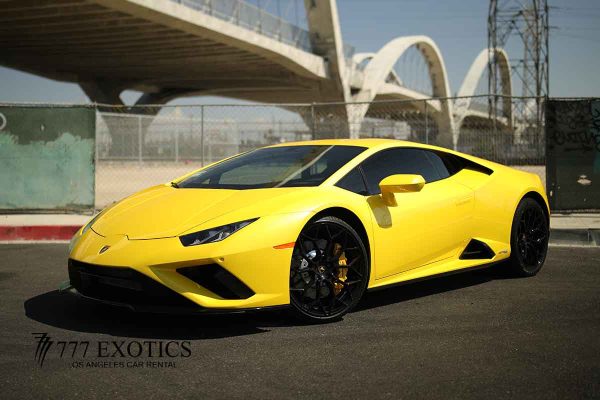 Live your race car fantasy commanding an ultra fast Lamborghini rental in Los Angeles from the 777 Exotics fleet. We carry the Lamborghini Huracan and Urus in many colors and trim packages and offer the Best Pricing Guaranteed and More Free Miles included when you rent a Lamborghini at 777 Exotics.

See why jaws drop everywhere at the mere sound of a Lambo’s engine revving up.

With so much performance and style packed into one vehicle, you can’t stop staring at a Lamborghini and neither can you stop thinking about it when you go home. Experience the magic of Bellisima Italia on the city streets of Los Angeles or drive to Vegas and Malibu.  Call to book your Lamborghini rental experience 800 903 5926.

Renting a Lamborghini for prom is the ultimate style statement. While luxury doesn’t come cheap, you’ll be surprised to find out that our rental rates compared to others will be perhaps the lowest, cheapest Lamborghini rental out there in the market. So no need to worry about cutting back for the best night of the year. Getting dressed up in a swanky outfit means your choice of transport needs to live up to the thought and care you put into your clothing. Be sure to call early to reserve the Lamborghini you want for your prom night. We easily get booked out during prom season so avoid disappointment and make your reservation now.

When the couple to be married are all about style and panache, then having a Lamborghini on hand for the wedding day is an option to consider. It’s fun, carefree, and very, very fast. You might have to remind yourself that it’s not a race to the altar.

This car just calls out to the inner race car driver that some of us didn’t even know we had. That’s the magic of a Lamborghini. You can’t help but have a strong tug of emotion once you see one, even if it’s just parked by the roadside. Imagine how thrilling it would be to hit Las Vegas or simply cruise the streets of Los Angeles in this masterpiece. Road trips are sacred “me-times” and your next journey deserves a Lamborghini to bring you wherever you want to go, as fast as you want it.

HOW MUCH DOES IT COST TO RENT A LAMBORGHINI?

It’s relative to say that we offer cheap Lamborghinis for rent. Value for money is a better term. Because with a masterpiece on wheels that each Lamborghini is, you can’t really put a price on the experience and thrill you get whenever you sit behind one. But as far as cheap rental rates for Lamborghinis go, our $999 starting rate per day is a good deal. After factoring in the hidden costs of ownership, maintenance, and of course gas… renting a Lamborghini from us is definitely starting to look good. Experience all the highs of this car without any of the hassles. We’ve taken care of it for you. From maintenance to cleaning, and even white glove delivery to your hotel, office, or event venue of choice, we spoil you from start to finish just like we spoil our cars in the garage.

Want to drive a Lamborghini in the scenic deserts of the US Southwest? Visit our 777 Exotics office in Las Vegas.

BEFORE YOU CHOOSE A LAMBORGHINI RENTAL – KNOW THE HISTORY

Automobili Ferruccio Lamborghini has its own unique origin story. Depending on who you believe, the first (and more romantic) version says that Ferruccio Lamborghini was dissatisfied with the clutch on his Ferrari, and one day went to the car maker himself to complain. Enzo Ferrari didn’t have time and took offense that this man would dare tell him something was wrong with his vehicles. Finally he told Lamborghini that it wasn’t the clutch, but the driver who had the problem! This didn’t sit well with Ferruccio, so he left Ferrari’s office and vowed to make his own exotic luxury car to rival Ferrari’s.

The second version is more pragmatic. Lamborghini was a mechanical wizard with an aptitude for diagnosis and creative repair of vehicles during his WW II stint in the army. He was assigned to a station in the military that was relatively untouched by the war around, and quickly Ferruccio gained a reputation as the man who could fix almost any vehicle on the camp. When the war ended, he saw that Italy needed to rebuild, and its agricultural sector had come to a standstill when resources were diverted to the war effort. People needed to plant and have a harvest so he created the Lamborghini tractor company to sell reliable vehicles to farmers who could now focus once more on food production. His tractors were known to be reliable and in a few years Lamborghini was a wealthy man, capable of buying all the top of the line cars of his time. While disassembling his Ferrari’s clutch, he noticed it was identical to the clutch used on his tractors. However, the same part in a Ferrari cost about three times as much as in a tractor. There was money to be made and Ferruccio seized this opportunity to build his own supercar with his name heralding the brand.

The first concept car Lamborghini produced was at his factory in Sant’Agata near Bolognese. At the Turin Autoshow of 1963, the GT 350 was unveiled to the public. While its design was beautifully done when compared to its contemporaries, Lamborghini felt that it didn’t make enough of an impact and had it redesigned. This turning point from producing a supercar that could rank among the Ferraris and other brands of the day, into stepping out even further to the design edge set the trail for what Lamborghini cars are known for today. Outrageous design, bold vents, sharp edges and harder lines than its competitors are what the Lamborghini brand is now famous for.

The car that began this trailblazing trend was the Miura, named after the famous Spanish fighting bull. With the Miura’s shockingly futuristic look, the tone for the rest of the supercars that followed was set. Formerly seen as an upstart, after the Miura the Lamborghini brand was officially was a legend.

Throughout its history other notable cars followed. The Countach, first seen in 1974, showed aggressive angles and the now-distinctive Lamborghini scissor doors. Alas, the history of the company itself was not so smooth. After several years Ferruccio sold the company to other investors, and while cars still rolled out of Sant’Agata, ownership changed hands from Swiss investors, to Chrysler, then Audi—each company having its own stamp on the design and manufacture of the famous Lamborghini supercar. 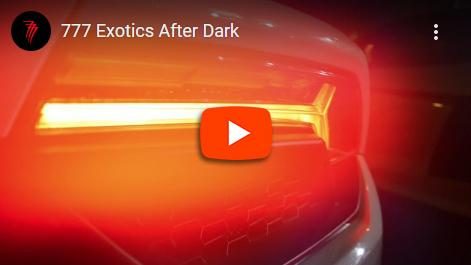 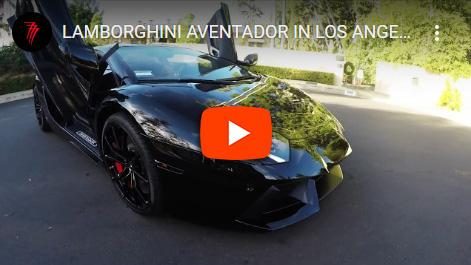 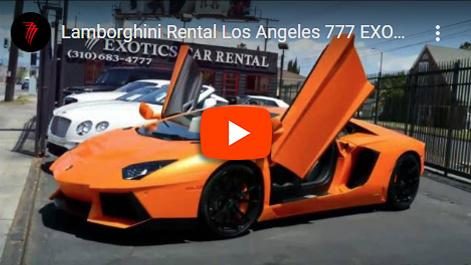 What are the requirements for Lamborghini rental in LA?

A Drivers License, Credit Card, and Car Insurance are required for renting a Lamborghini at 777 Exotics.

Can international drivers rent a Lamborghini in the USA?

Yes, you can rent a Lamborghini at 777 Exotics. You must have a valid driver’s license. We can provide you coverage for the car, subject to manager’s approval and terms.  For international drivers, many Lamborghini rental options are available. Call 800-903-5926 or email [email protected] for details.

Can I rent a Lamborghini under age 25?

You must be of legal age to drive a car and be licensed by your state or country.  You can rent a Lambo under age 25 at 777 Exotics, however this is at the sole discretion of management. A fee will apply for drivers under age 21. Contact us for details.

Can I hire a Lamborghini for just a day?

Yes, you can hire a Lamborghini Urus or Lambo Huracan for a single day depending on availability.

Can I drive from Los Angeles to Las Vegas?

Yes, you can make a one way trip to Vegas or LA. Additional charges apply for miles and shipping the vehicle back to its origin city. Contact the 777 office to determine the full cost of driving a Lambo from LA to Vegas.

What is the cost of a Lamborghini rental in Los Angeles?

Your Lambo car can be delivered depending on the distance from the 777 Exotics office. There is a fee to cover the employees time, fuel, and mileage that comes with delivery. If you want to get a quote with the exact cost of delivery, contact our office with your location and dates of rental.

How clean should the car be when returned?

The car should be returned relatively clean and smoke free. It does not need to be spotless, however excessive garbage, drinks spilled, and overall trashing of a luxury vehicle may incur a cleaning fee.

Does 777 Exotics have hourly rental of Lamborghinis?

For Self-Driving a Lamborghini our rentals are for a 24-hour minimum in Los Angeles and 4-Hour Minimum in Las Vegas.  Contact our office to create the reservation that fits your budget and timeframe at 800-903-5926.

How many miles can I drive the Lambo?

You can drive 100 Miles for each 24-hour rental period in LA. If you go over 100 Miles the additional mileage will be charged when you return the vehicle.

A discount for multi-day rentals?

Yes we offer discounts for weekly and monthly rentals. For discounts on multi-day rentals contact our office for details at 800-903-5926.

What payment methods do you accept?

We accept Cash, Credit and Debit Cards, and Bitcoin.

Yes, a security deposit is needed to rent a Lamborghini – similar to a Hotel deposit for incidentals. Deposit amounts vary depending on type of car.

How do I reserve a Lamborghini in Los Angeles?

Do you match competitor prices?

Yes we match or beat our competition prices on similar makes and models of exotic cars.

How does rental of a Lamborghini work?

Select your car and provide the insurance and payment required. Your Lamborghini rental will be setup by our office staff and ready for you to enjoy when you arrive.

Is the make/model and availability guaranteed?

No. Each vehicle is unique and the availability is dependent on factors we do not control such as previous renters’ later return, unscheduled maintenance, or vehicles being in the shop for body work. 777 Exotics does NOT guarantee your vehicle selection or availability but will do everything in our power to fulfill your needs to your satisfaction.

Are there group discounts or corporate rates?

Yes 777 Exotics has rental packages available for reservations of 6 or more cars. Please contact our reservations team for more information on group car rentals at 800-903-5926.

Are there penalties for late returns?

Yes. Returning your car later than the specified time results in a late fee plus prorated amounts.

Are there speed restrictions or governors?

No governors are installed in 777 Exotics vehicles. Drivers must abide by local speed and traffic rules and laws at all times while driving a Lamborghini.

Can I reserve a Lamborghini for someone else?

*Yes you can add 1 additional driver without a fee but after that fees may apply. Additional drivers must have car insurance and be licensed as well.

Can I pay for the Lambo rental with cash?

Yes you can pay with cash when you pickup the car.  To make a reservation and pay with cash on your arrival – contact our office for details at 800-903-5926.

Do you accept walk-ins and same day reservations?

Yes we are open 7 days a week. You can visit our offices and see the fleet during operating hours.